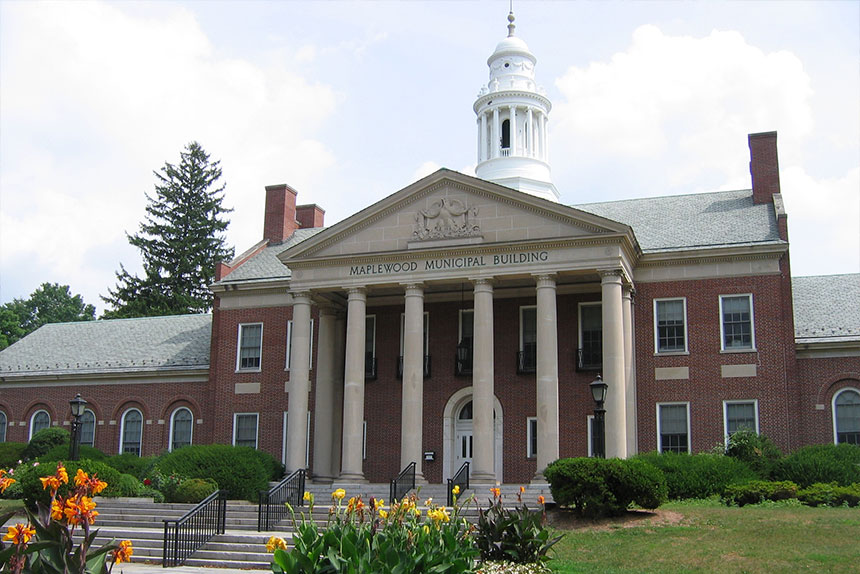 Recently voted the #1 downtown in New Jersey, Maplewood emotes a Norman Rockwell feel with beautiful turn-of-the-century homes and a highly regarded school system. The Village, as it is called, is charming and walkable;  bars, restaurants, a movie theater, galleries and many family owned shops keep the downtown hopping. Are you are looking for a Victorian with wrap-around front porch, a traditional colonial, a stately Tudor, or an early 20th century farmhouse? Maplewood has it all! The unified Maplewood-South Orange School District provides award winning schools and sends its graduates to the country’s top universities. The creative arts scene in Maplewood is second to none, and the town is home to many writers, Broadway performers and musicians. Maplewood is the perfect antidote for those seeking quality of life just a stone’s throw from NYC.

Maplewood is 22 miles west of New York City, accessed by the NJ Turnpike, Garden State Parkway, I-78 or Rt 280. It is accessible by car and or an easy 30-minute train ride on NJ Transit. It is also close to the Newark Liberty International Airport. Click here for the map:  Maplewood

Maplewood schools are part of the highly regarded and richly awarded South Orange-Maplewood School District. With the support of an involved parent organization, a motivated, academically-driven faculty, and a diverse student body, the District educates over 6,800 students each year. The student/teacher ratio across the district is 1:10. The District’s mission is “to be one of the top-performing diverse suburban school districts in the nation.” It strives to provide an excellent education for each and every student by providing all students, including those who may be struggling, with rigorous academic opportunities that help them reach their personal college and career aspirations. Click here to see all of the Honors and Achievements in the District.

Maplewood Middle School guides pupils academically and socially through the middle years and prepares them for the transition to high school. In addition to their well-structured academic foundation, middle school students also have access to character-building programs, arts education, and community activities. Recently, a number of MMS students went to Washington D.C. to take part in a conference on International Affairs sponsored by George Washington University.

Elementary education throughout the District utilizes computers, Internet access, modern media and technology centers, and keeps up with the latest trends and developments in education. The Core Curriculum forms the basis for the academic programs that offer language arts, mathematics, science, social studies, art and music. Special education services begin with pre-K programs, a strong support program is available for students needing additional assistance, and gifted enrichment programs are available to 4th and 5th graders. More than sixty foreign languages are spoken in the homes of South Orange-Maplewood students and ESL instruction is provided to students who are in need.

For those looking for private or parochial education, the following schools are just a few of the many excellent options near Maplewood & South Orange.

The quick commute to NYC is one of the many reasons people flock to Maplewood NJ. Pick up a cup of coffee, jump on a New Jersey Transit train and you are in the city in 30-minutes or less!  The Midtown Direct trains bring commuters directly into New York City’s Penn Station and the Hoboken Line brings commuters to Hoboken, NJ, where Ferries and Path trains provide connections to lower Manhattan. The Maplewood train station is within walking distance of many neighborhoods. Annual parking passes in Maplewood are available for $210 or you can purchase a combination jitney/parking pass for $232. Maplewood Jitney service to the train station is available to the surrounding neighborhoods.

Major highways are easily accessible from Maplewood and provide easy driving to and from New York, Newark, and all points north, south, east, and west.  Area airports are also within easy reach, with Newark Liberty International Airport only a 15-minute drive away.

Here are the latest market stats for Maplewood NJ.

The Maplewood Recreation Department offers a wide variety of sports and activities to its residents. They may choose  soccer, basketball, baseball, football, lacrosse, field hockey and many more. The South Mountain Reservation, a 1500 acre tract of wooded hills and pristine fields adjacent to Maplewood and South Orange, is great for hiking, dog walking, sledding and mountain biking. Memorial Park in Maplewood has ball fields, playgrounds, basketball, tennis and paddle tennis courts and plenty of open green space. There are many pocket parks and playgrounds spread through the town and people can always be seen biking, walking and running. And don’t forget the Maplewood Municipal Pool, perfect for hot and humid summer days.

At the private level, Maplewood Country Club offers golf, tennis, pool and dining in a bucolic setting and The Maplewood Club is a mecca for tennis.

Dining opportunities abound in the town, ranging from quaint coffee and pastry shops like The Able Baker and Cedar Ridge Cafe to artisanal farm-to-table restaurants. Some of the standout Maplewood choices are Coda Kitchen and Bar for the great food and lively bar scene, The St. James Gate for classic pub grub and the best Guinness around, Restaurant Lorena and Abril Cocina for fine dining and Arturo’s for amazing pizza…but please come and explore for yourself because the list goes on and on!

Concerts, theater, arts walks, open gallery nights, artist studio tours…..Maplewood has it all! Maplewood supports two arts spaces, the 1978 Maplewood Arts Center and The Burgdorff Center for Performing Arts. The amazing and wild Maplewoodstock, is one of the summer’s highlights, attended by thousands every year.  First Night Maplewood on New Year’s Eve is always well attended; a wonderful opportunity for every resident to enjoy magic, music, singing and the performing arts in town-wide venues.

Shopping in Maplewood is easy and convenient. A supermarket, post office, library and  wide variety of smaller shops, ranging from gift shops such as Perch and No.165 for eclectic home goods and clothing to Tenth Muse Gallery for hand crafted jewelry, can be found in the quaint village. Words, one of the few remaining independent bookstores in the area, hosts signings and readings, while Shenanigans Toy Store carries the latest toys for kids.

Dutch, French, and English settlers first inhabited Maplewood in the 1670’s. They followed three Indian trails that roughly correspond to today’s South Orange Avenue, Ridgewood Road, and Springfield Avenue. With the advent of a railroad connection to Newark in the 1830’s, development in Maplewood began in earnest.  By the early part of the 20th century, the town was firmly established as thriving bedroom community of New York City.